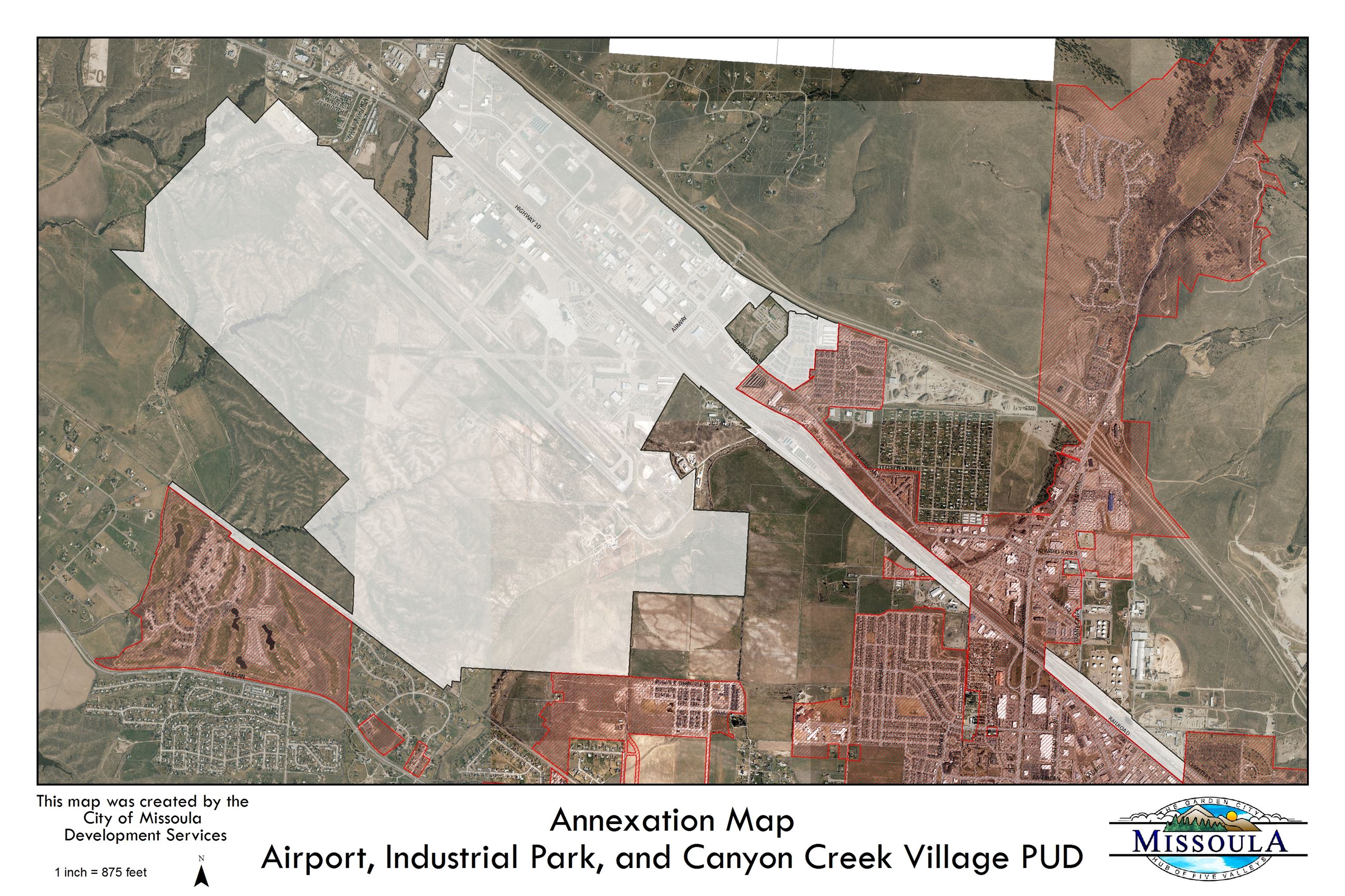 Montana Land Use and Planning Statutes give cities the authority to annex unincorporated land when petitions to annex have been signed by 50 percent of more of property owners in the area to be annexed (Title 7, Chapter 2, Part 46, Annexation by Petition, Montana Code Annotated).

Within the ANNEXATION AREA approximately 80 percent of properties currently receive city services (sewer and water) and many have received those services since the early 2000s. The City of Missoula has signed Petitions for Annexation on file for all of those properties.

With a few exceptions, the only properties in the ANNEXATION AREA for which signed Petitions for Annexation are not on file are in public ownership or as yet are undeveloped. 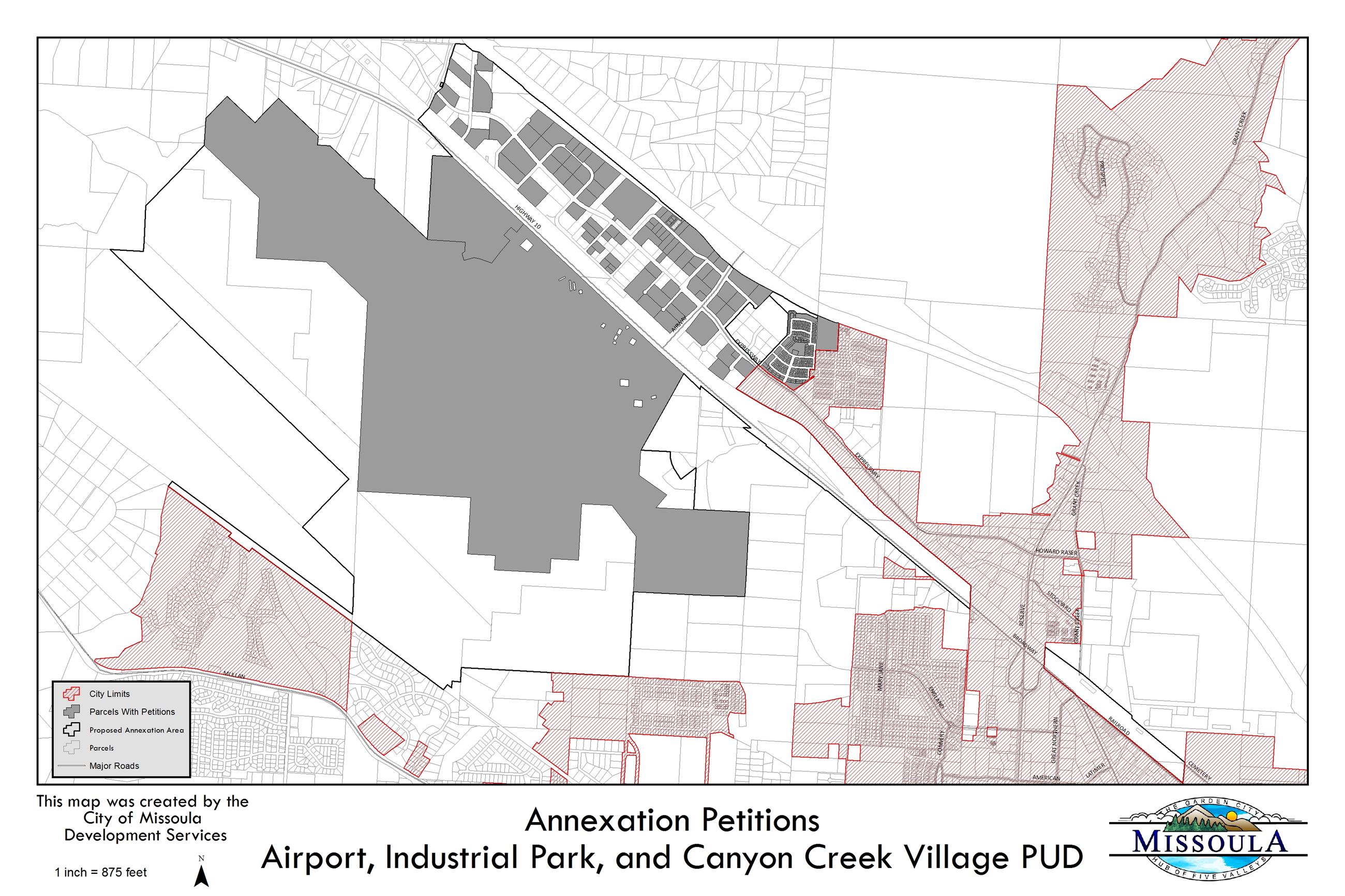 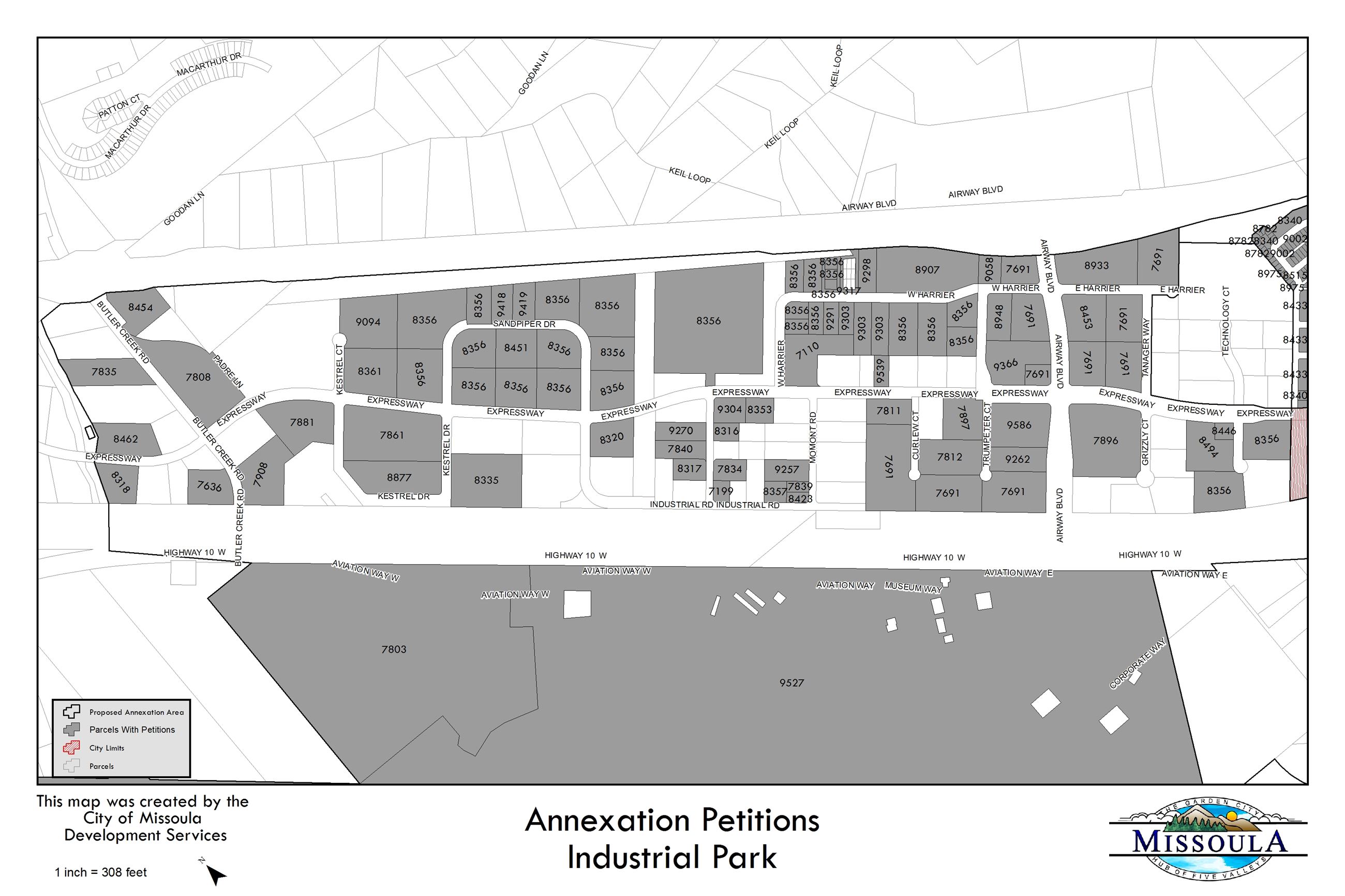 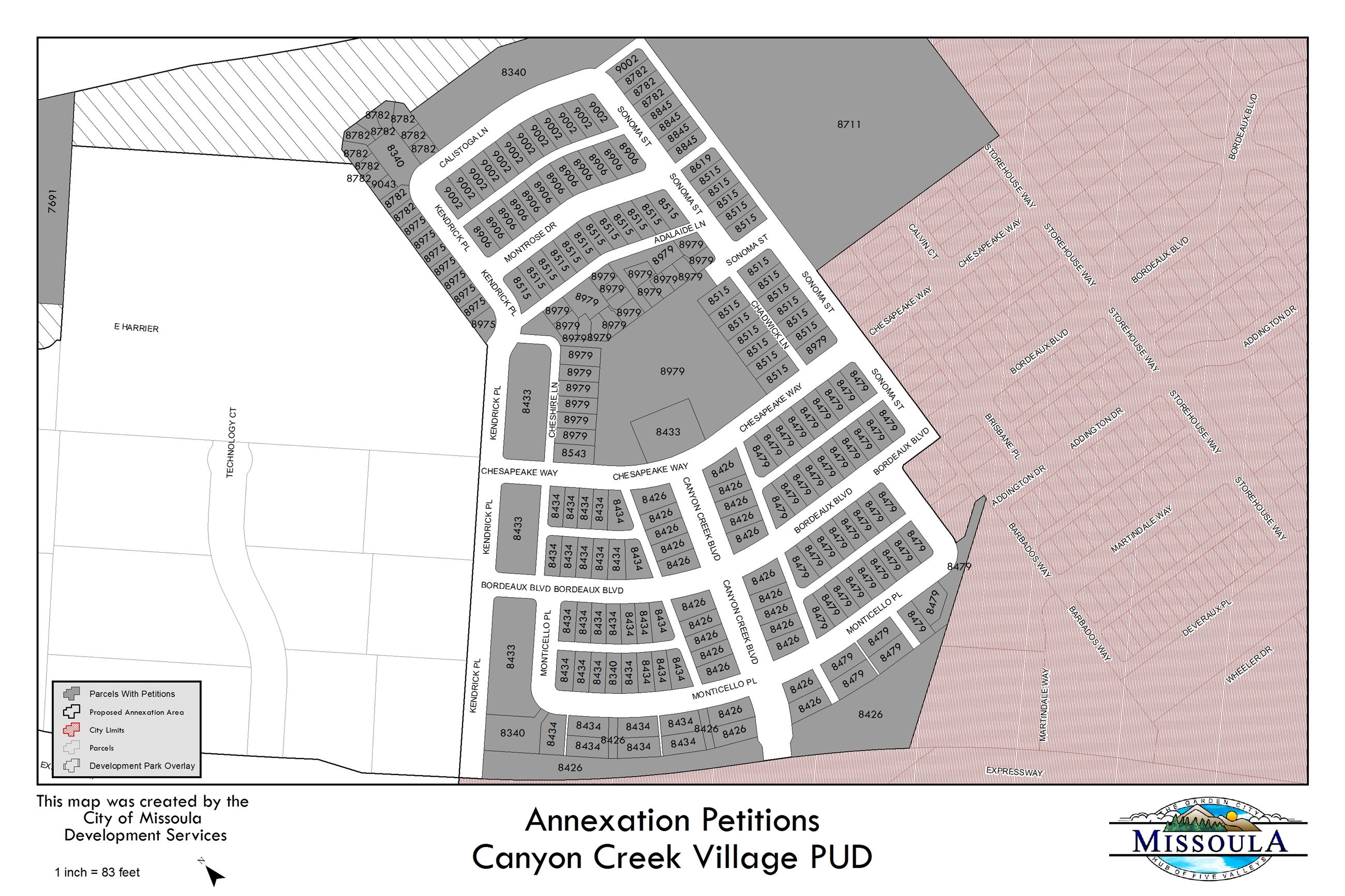 **Canyon Creek Village, in its entirety, was petitioned prior to subdivision under petition #8340

The City of Missoula has deferred initiating annexation until now but with the expiration of the Missoula Development Park TIF in June 2018 (making those properties eligible for annexation) and given the number of properties already receiving municipal sewer and water service, the City can now expand city limits and efficiently provide the full range of city services within the ANNEXATION AREA.

This area will be served by City Police, City Fire, City Public Works (including the Streets Division) and City Parks and Recreation. Upon annexation, new development and redevelopment within the ANNEXATION AREA will be reviewed, approved and inspected by City Development Services staff, streamlining the development process.

Upon annexation, the ANNEXATION AREA will become a part of Ward 2 that is currently represented by City Council Members Jordan Hess and Mirtha Beccera, who plan to attend the September 5th Open House.

According to that website, city taxes generally account for about 28 percent of total property tax assessments for city property owners. On the other hand, there will be relief from current tax assessments such as that for Missoula County Rural Fire. There may also be associated benefits such as lower insurance premiums (depending on your insurance carrier) because of Missoula Fire Department’s better ISO rating. City taxes would not be reflected on property tax statements until November of 2019.

We will expand upon this section as more information becomes available.

It is proposed to assign Missoula International Airport a new Aviation (“A”) zoning that will permit aviation and aviation-related uses.

It is proposed to assign city C2 and M1 zoning to commercial and industrial uses respectively in the Missoula Industrial Park, with a zoning overlay, to ensure that new development and redevelopment follows the same development patterns as established in Missoula County. This will not result in any change for the Missoula Development Park Property Owner Association or affect Covenants, Conditions & Restrictions (CCRs) or application of Development Guidelines. OP zoning will be applied to parks and open space parcels. It is proposed to assign DeSmet School properties the M1R zoning designation.

It is proposed to adopt the Canyon Creek Village PUD as is so property owners in the subdivision will see no change in development standards that apply or development rights that are conferred on their properties. Similarly, the Homeowner Association (HOA) will not be affected. 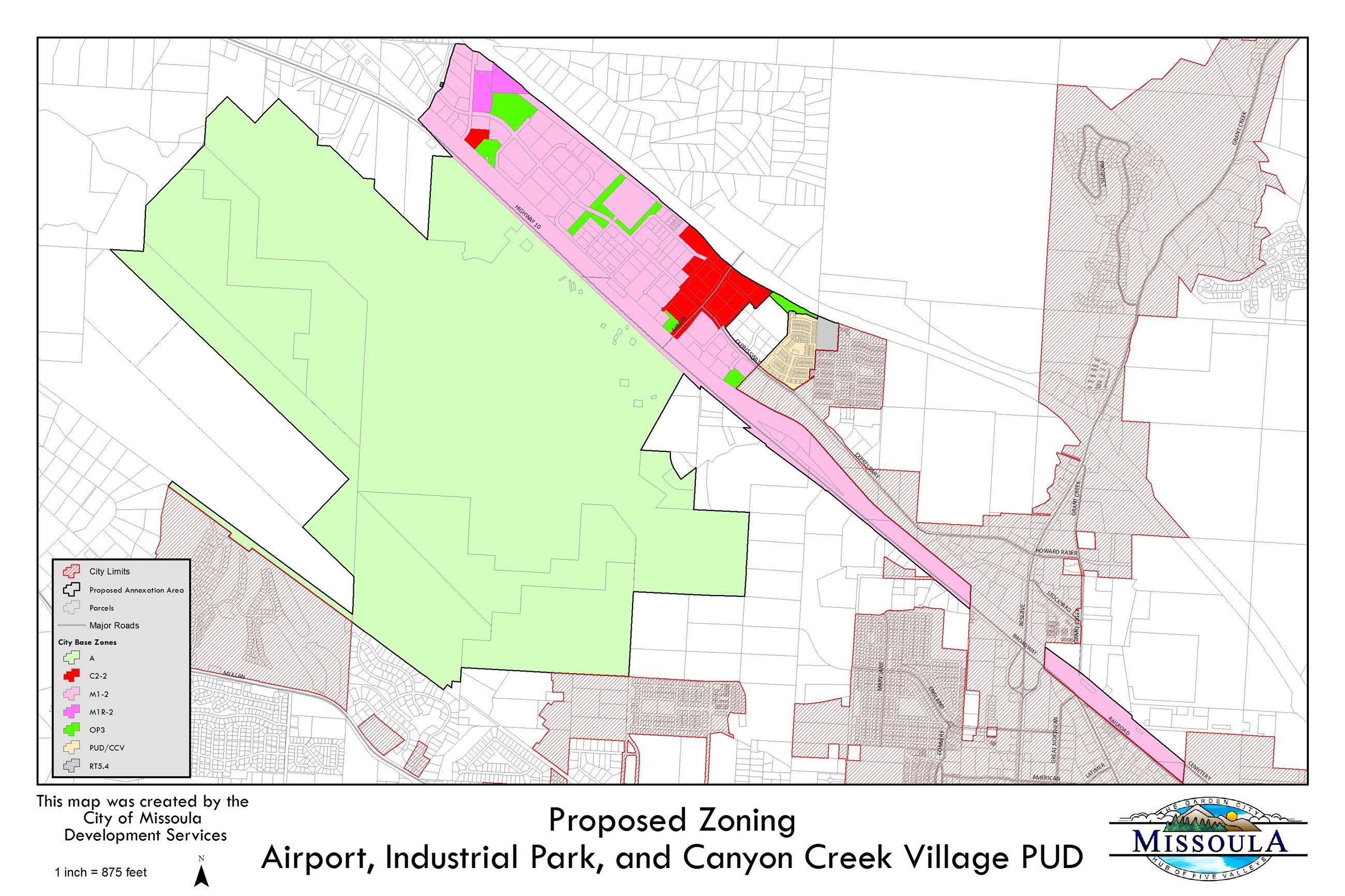 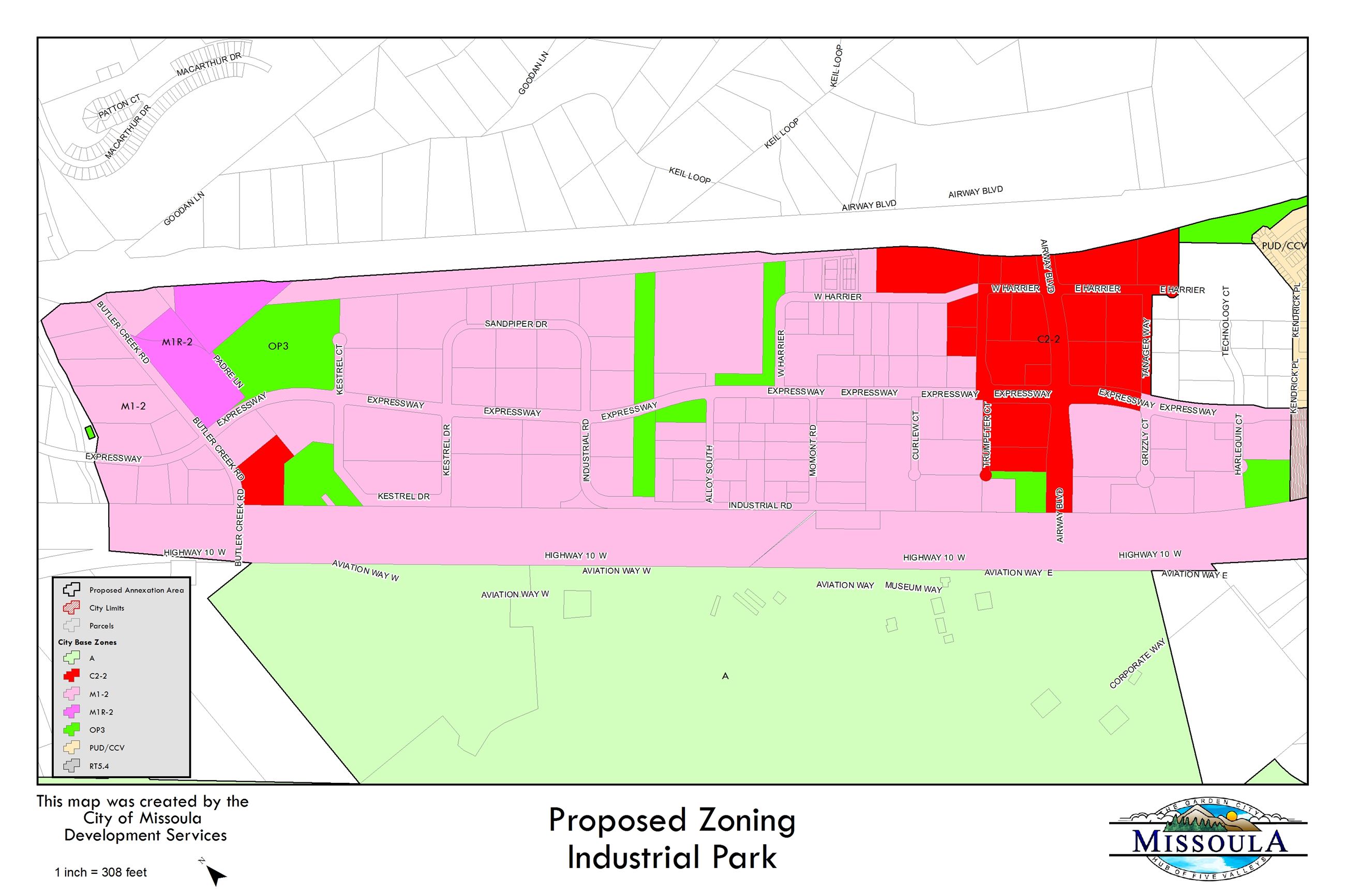 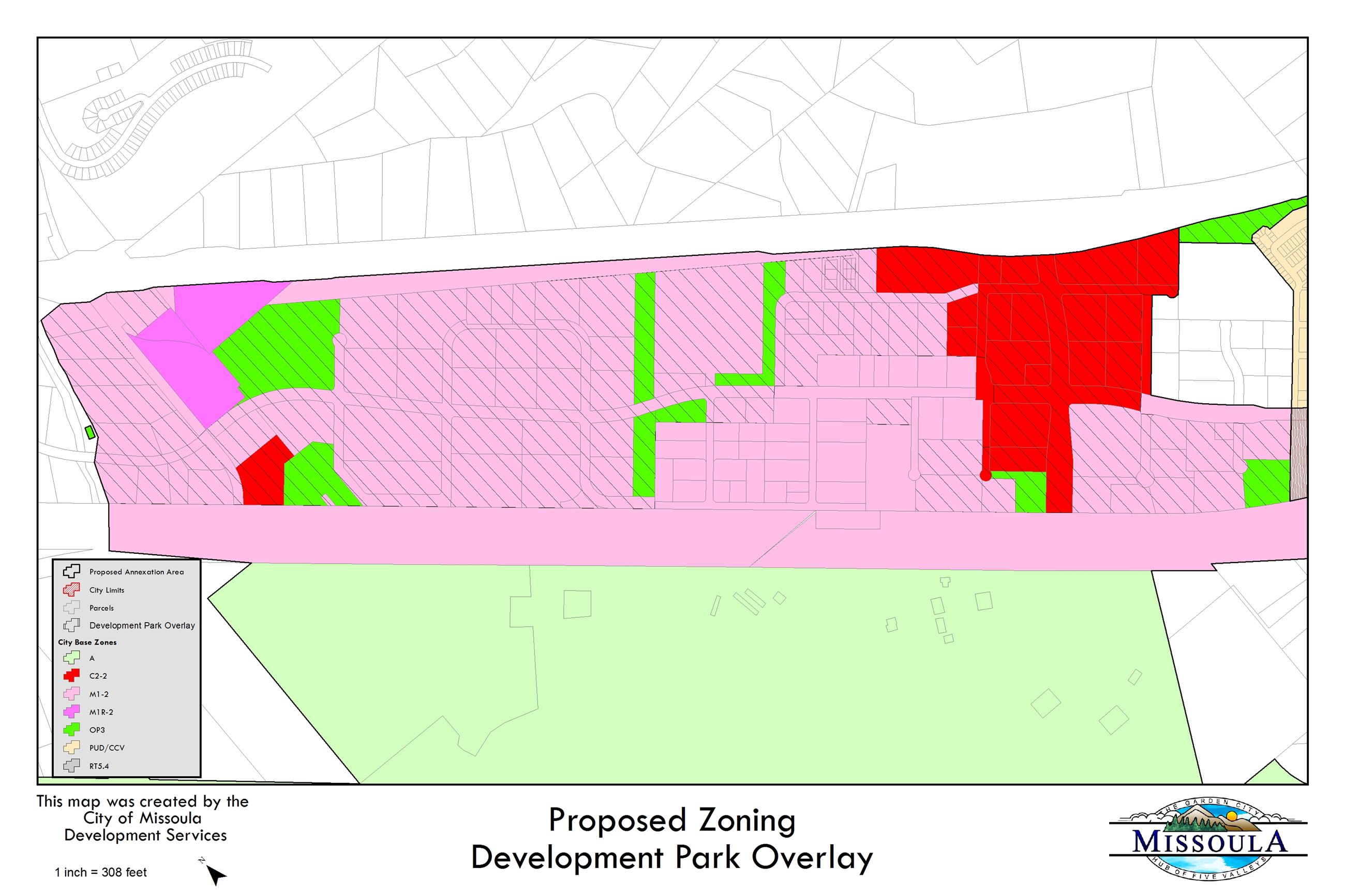 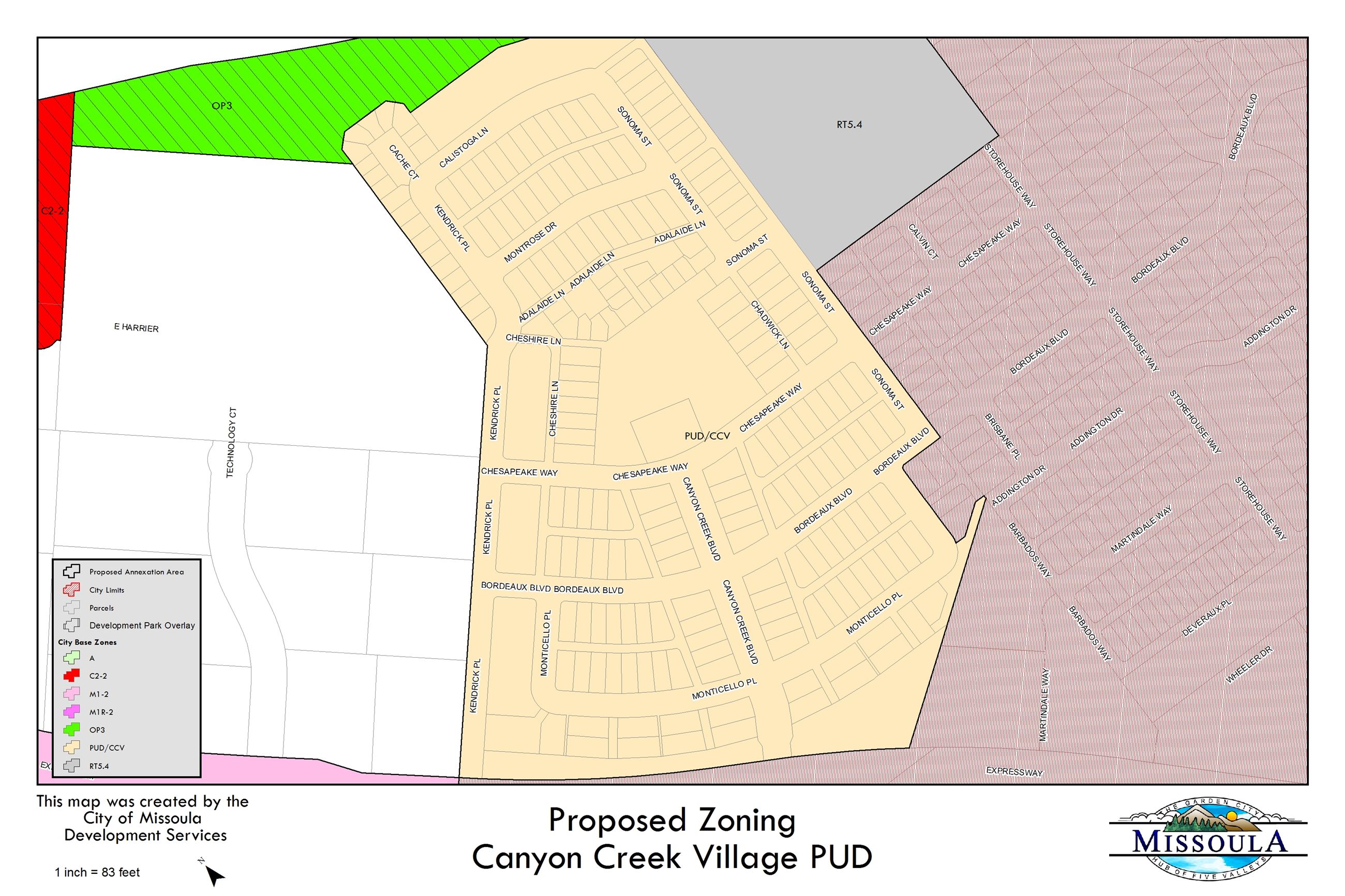 Information on the process for annexation will be updated as it becomes available. But generally, the annexation process will be preceded by creation of the new zoning district and zoning overlay that will be considered by Planning Board and acted upon by City Council. That will be followed by the annexation and zoning upon annexation process through the City’s Land Use & Planning Committee and City Council. As dates and times are set for public meetings and public hearings, details will be posted here in addition to statutory public notice provisions.

An Open House was held on the evening of Wednesday, September 5, 2018, in the Jefferson Room of the Wingate Hotel at 5252 Airway Boulevard.  A total of 45 people signed-in and were able to peruse a series of maps, ask questions of city and county staff and leave comment regarding the annexation.

Click here for the FAQ information sheet (PDF) that has been compiled in response to questions asked during the annexation process.